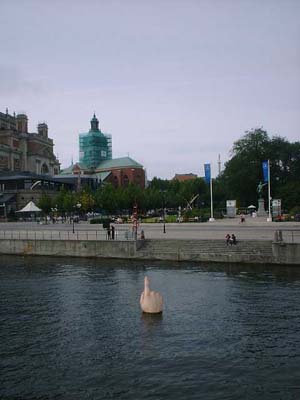 Recently I went to the Norberg Festival in Sweden, before I left I’d never been abroad, apart from a 3-day trip to Ireland (for my gran’s funeral, which wasn’t exactly a happy affair). I had never flown and I hadn’t met any of the people I was going to the festival with! They were all people I’ve known for a few years, who have similar taste in music, who I met over p2p file sharing networks!

Here’s how I got on – firstly, flying is fun! One of my friends hates take-off and landing, another just hates being up in the air, personally I thought it was all a buzz!

My plane arrived at about 9:00pm, I got a bus ticket and then had to phone my Swedish friend Caspar (who I was staying with) to arrange to meet at the bus stop. My phone had tapped into the COMVIQ network but decided that it didn’t want to function! Every number was greeted with a warning about “barring settings” I couldn’t phone within the country and I couldn’t phone home either! Crap, the phone was supposed to work abroad! I asked the Swedish couple beside me if I could borrow a mobile phone, they gave me that precious look, as though I was from another fucking planet, never mind another country! Apparently they both had phones but neither of them were charged…I don’t think they realised the seriousness of the situation…if I couldn’t get access to a phone I was sleeping rough for the night! Ok, so I could have used a pay phone…but I didn’t have any coins so I’d probably need to bum some change…(besides I can’t remember seeing a single pay phone while I was there), so just as well I realised that I could change the network on my phone, up until then the phone settings option on my phone was a mystery! So I switched over to the Telia network and hey presto, it began functioning as a mobile phone…so I phone Caspar, he tells he’ll leave immediately and meet me at the station…

So the bus arrives at Södertälje Syd, an interchange bus and train station on the edge of town at about 10:20pm. I walk inside, the place is open but no one’s around, after sitting on my own for 15 minutes I see the bare-footed duck woman. This girl just waddled in off the street with no socks or shoes on, walked up to a ticket machine, hit a few buttons and left, a few minutes later she returned with who I assume was her boyfriend, they went up to the machine together and soon duck woman was screaming “YEEEEESSSS!” She got a ticket! Wooh! Yeah!

So anyway, the couple disappeared, then a guy with a lot of chains around/all over him wandered in a door of the station and walked out the opposite end. Some time later another guy did the exact same…I guess there’s not a lot to do in this town! Time is passing, I give Caspar another call, no answer, I try again a few minutes later, turns out he left his phone at home and I’m talking to Dan, one of the other guys I’m meeting, who came all the way from Sydney and is at Caspar’s place right now!

45 minutes pass and then Caspar finally appears, he says he was late because he missed the first train so we go to get the train to his place, but we end up on the wrong platform and the train leaves without us…and the next train isn’t for another hour!
So, we get a bus instead, which drove for about 10-15 mins and then we realise that the bus has just passed under the bus station where I started…the bus has just went around in a circle, it took about 15-20 minutes to finally reach the stop, and it could have gotten there in 5 if it had the decency to just go in a straight line!

We still need to catch a train and there’s one in the station, it’s the end of the line, there is only one way the train can go…so the train starts and a black man with horrid fashion (his track suit bottoms said “Jamaica” in colourful letters) comes over and sits with us, he was speaking in English but I haven’t a clue what he was talking about…other than that he asked if I was happy or sad…i think I should have replied that I was very fucking scared! 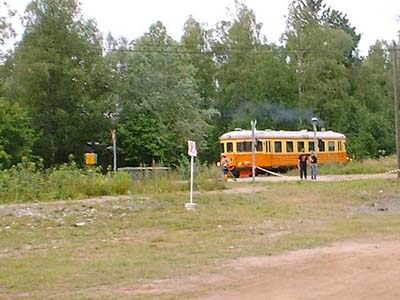 So the train comes to its first stop and does a very curious thing, it goes backwards, as I said the train could only go one way…by this point I was thinking that I’m never going to leave this place! It was like something out of a David Lynch movie!

But the train was just switching tracks, so we finally reach Caspar’s house after midnight. The following day everyone else arrived, Erik from the Netherlands and Jorma from Finland and we set off to Norberg… 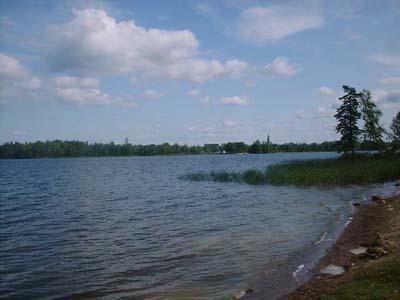 We were staying in a hostel just outside the town of Norberg, beside a lake, lakes are bloody everywhere in Sweden! The countryside reminded me of Scotland only flatter! There was a sign pointing to a town just along the road, on the main road it said the town was 13 km, turn the corner slightly and another sign says 12km, must be the shortest kilometer on the planet! 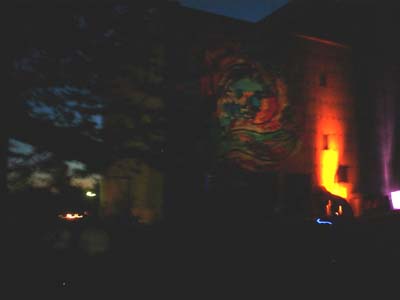 Onto the music festival itself, it’s quite a small festival with a maximum of 1500 people (I believe) but I don’t think they sold all the tickets. The camp site was pretty small too. The main stage is probably the strangest venue I’ve ever been to, it’s actually a disused mining refinery. It reminded me of the Crystal Maze’s Industrial zone! Being dark and dusty inside, I got some good photos of light coming through the buildings windows…and there was a strange home-made musical device in the bottom corner…just behind the erm, wrecked car! 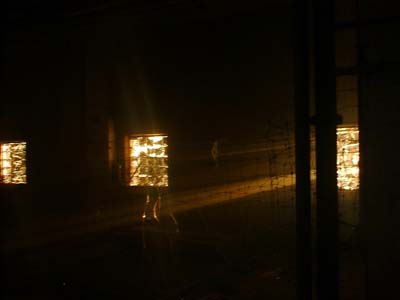 The festival was a good laugh, especially with some of the language problems, like when I asked for “2 cola” thinking “cola” was an international word and got 2 beers instead! Philip Jeck was the best performer, I’d seen him once before and he was more impressive this time around. The most entertaining act was Je M’appelle Mads…2 sometimes 3 guys…complete with “filthy” by my prudish-Brit-attitude visuals comprising lots of nudity! There was even some audience participation, I have no idea what was said…but I think the gist of it was “guess what’s under the foreskin!” and I was disappointed that I only caught 5 minutes of the Europussy band, with their “is that a man with tits or a girl with a beard grinding his/her crotch!?” :O 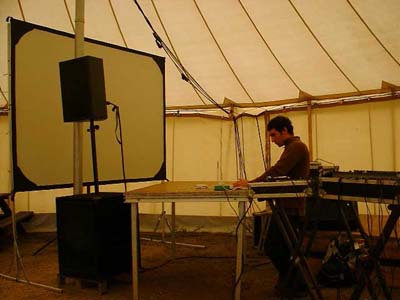 There was an open stage and spaces in some of the venues for anyone to play. Daniel, from Australia played a nice mp3 mix set in one of the tents. Overall though not all the music was great, a lot of it was just background music, nice to listen to but not all that great to watch someone twiddle a few knobs or fart about with a laptop. Most of the acts in the main stage had visuals though and you could pretty much lie down and go to sleep if you wanted! I wasn’t so sure about the guys in control of the PA/mixing a lot of the stuff seemed too loud and distorted…luckily I brought along ear plugs! 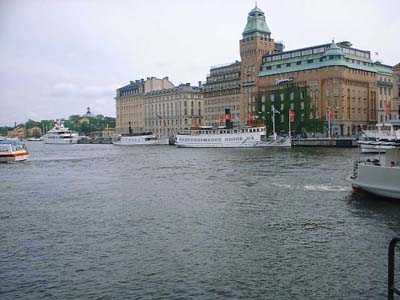 Stockholm was really nice, very picturesque, so I’d like to go back again, though there were too many McDonalds in and around Stockholm for my liking, there was though some guy on a street corner ranting, he had a sign that said “Fuck McDuck”. 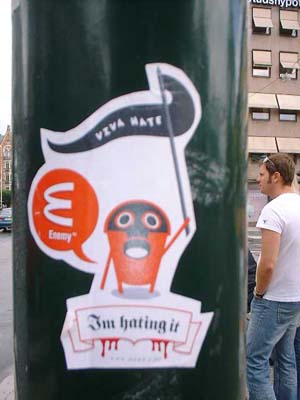 I’m a fan of the Swedish metal band Meshuggah and I figured while I was there I’d look for a Meshuggah T-shirt…I tried a few stores, even one that was dedicated to music t-shirts but no luck, of course it wasn’t a problem finding a Marilyn Manson or Linkin Park T-shirt!

I went to the modern art gallery and IMAX cinema and watched an enjoyable though cheesy movie about coral reefs and I shat myself during the trailer when a giant lion appeared on screen!

I had a funny encounter in a Chinese restaurant too. A dish was described as having “meat” so I asked:
“what meat is it?”
“meat”
“but what sort of meat?”
“meat meat”
“I mean from what animal?”
“yes, meat from an animal”
I still ate it whatever it was. 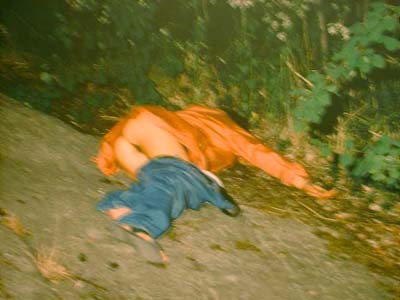 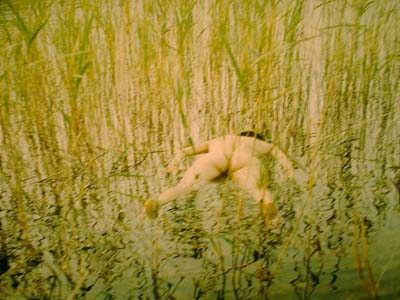 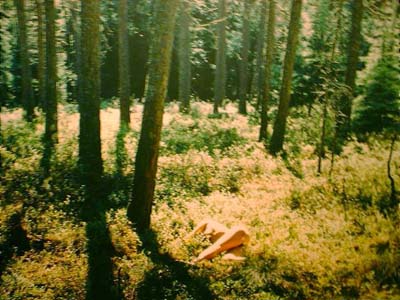 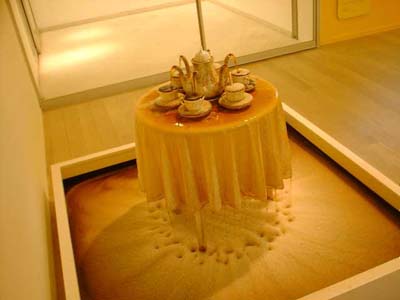 This wasn’t in the Modern Art Gallery but a creepy discarded shopping trolley on a main street. It is surely worthy of inclusion at the gallery though! 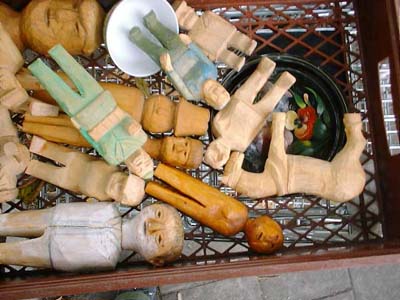 A car almost hit me while crossing a road, I said to Caspar, “Hey! I had a green light!” he replied “but he had a green light too!” So that was my introduction to how traffic works outside of Britain.

I noticed lots of Swedish flags on buildings while I was there…are the Swedes a patriotic nation then I wonder?

• cute girls who speak alluring and far better English than most Glasgow girls!
• power saving escalators, which only operate when you stand on the pressure pad thingies
• toilets with 2 flush settings
• Free maps of towns in bus stations etc.
• Foodstuffs called Plopp, Japp and Nogger 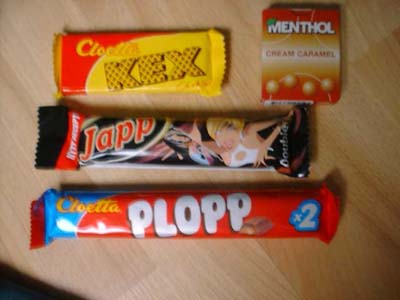 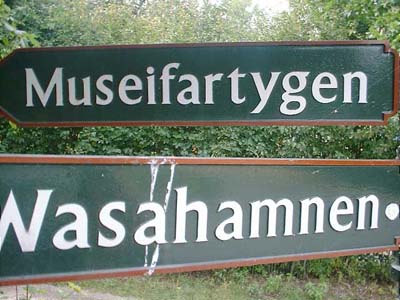 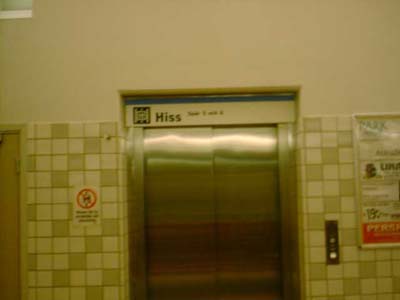 Overall:
Good Fun. A very enjoyable holiday, I want to go back to Norberg next year, only I want to be playing there instead!

Sidenote:
WTF is it with life!? In the past three years the only place I travelled to was London for just a day and then in the space of 3 weeks I was in Edinburgh, Fort William, Durham and Sweden…and after being unemployed for months, without any luck I have 3 interviews in 1 week! And as for the interview I had yesterday, the interviewer told me there was only 1 other guy interested in the job, so it was between me and him, so I was talking to one of my friends today…turns out he was the other guy and he got the job! D’oh!